A team is a group of users (more flexible and informal than Roles), which serves to facilitate collaborative work. Teams are not part of the formal definition of processes but the teams are associated to processes.

What is the objective of a team?

To create a team you must click on User Management on the side menu and select Teams and within the section click on the New team button located on the top right.Once that is done a pop-up will open where you must define the name of the team, the associated processes and the description of it.Only the users that have the Administrator or Business Analyst role will be able to create and modify the processes associated to a team.

The teams have two types of users:Leaders: These are those users who, in addition to being able to complete the tasks, will be able to view the team's metrics and reports.Members: Any user that belongs to the team and completes tasks.The user who creates the team will remain by default as the team leader but can be removed as long as he is not the only leader.To add users to the team simply select the users in the text box and click on Assign.To change a member to leader or vice versa you must take the user and drag & drop him/her to the other column.There can be several leaders and several members in the team, but a user can be leader or member (but not both) of a certain team.

Both users with the Administrator or Business Analyst role and leaders can edit the users belonging to a team and its configuration (Name and Description).Only users with Administrator or Business Analyst role will be able to modify the processes associated to a team or delete a team.In case a process associated to a team is deleted it will be removed from the team and its data will not be shown in the dashboard.

The Dashboard can be accessed by all users with the role of Administrator or Business Analyst and also by those users who are team leaders.The leaders of a team will be able to enter the Dashboard even if they do not have the previously mentioned roles, for these users a new item will be added in the left menu Dashboard to access it.All the team leader users will see Tags for each team they are leaders of. By selecting the tag they will be able to see the Dashboard belonging to that team. Users with the Administrator or Business Analyst role will also see a Organization label that will show the Dashboard of the whole organization. 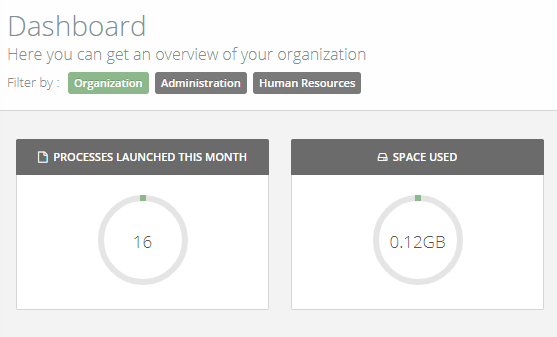 What will the charts show?

The data collected from the tasks and instances of the processes associated with the team you selected and on which all the users belonging to a team (both leaders and members) have worked.If the selected team did not carry out any activity, the chart will be empty.IMPORTANT: the instances started or tasks completed by the System role are not taken into account in any team. When we refer to instances initiated by the System role we are referring to public forms, instances initiated by timer or by the API. While tasks completed by System are tasks that are completed by conditionals and timers.

Filtering data in the charts

The processes by which the user can filter the graphics, are only those associated with the team that is selected at the time.That is, if I am looking at the metrics of the 'Human Resources' team, the only processes that can be seen or filtered in the charts are the processes associated with the Human Resources team.The filter will be available while the leader is in the Dashboard. When the leader leaves the Dashboard the process filter will be restarted. Administrators or Business Analyst may have permanent process filters when they select the Organization tab.

Selecting a user in the User Management > Users > flokzu@flokzu.com section will show both the roles and the teams associated to that user. 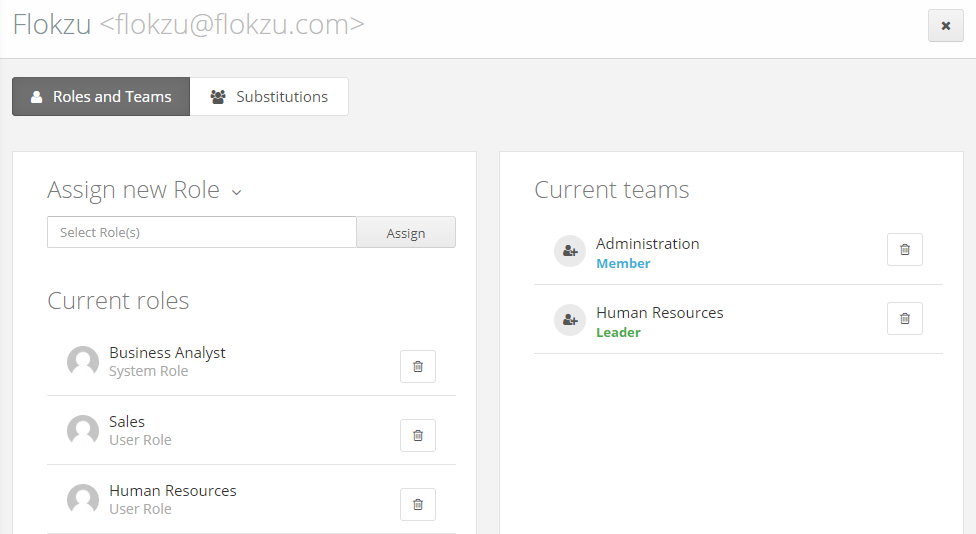